This week’s blog is part of a series of blogs by Ibrahim Inayatali and Alan Berezny on International Perspective. Read Part 1. Read Part 2.

A recent article by Dr. Rupert Graft Strachwitz from the Maecenata Institute for Philanthropy and Civil Society in Germany highlights the emergence of international philanthropy as a major force in support of civil society by donors from around the world. He notes: “…society has gone global and many people’s lives and interests no longer stop at national borders… it is now natural that philanthropic giving has become a global proposition. In recent years, international, cross-border philanthropy has mushroomed. In an age where any news item, including major natural and manmade disasters, protest movements and the violation of human rights, spreads around the globe in almost real time, more and more citizens have first-hand experience of travelling and even living outside their own country. Empathy and compassion, followed by the urge to do something, no longer remains restricted to the local community. Voluntary action has become a common feature and indeed a decisive force in shaping social change, policy, and governance to an extent unheard of even a generation ago.”

Canada is home to one of the world’s most pluralistic societies, with residents having origins in virtually every country. In 2014, 260,404 permanent residents arrived in Canada from 192 different countries (the United Nations is comprised of 193 member states). A CBC report from the last census in 2013 indicates that 6.8 million Canadian residents, or 20.6 percent of the total population, were born outside of Canada, the highest among the G8 countries.

What does convergence of the two trends—i.e. growing international philanthropy and changing Canada’s demographics—mean for development teams at Canadian charities who seek to grow their pipeline and cast their net wider in the pool? It means that the world is now their oyster for prospects, that organizations need to take measured steps to break down walls from their traditional models and explore the more challenging, but potentially rewarding, source of prospects within the various pluralistic communities in Canada and from around the world.

As fundraising consultants with active presence in the Asia Pacific region, Western Europe and North America, Global Philanthropic has established some guidelines for Canadian post-secondary clients to consider in their planning processes, especially in working with prospects from Asia. These guidelines are, however, relevant to other regions around the world and may be extended to other types of organizations. Some of these strategies are outlined below.

Key strategies for international philanthropy Major gifts from overseas markets will not be achieved through “philanthropy tourism,” which are annual tours typically comprising alumni or parent receptions in key cities and a few meetings with important individuals; these discussions never seem to lead to action. Transformational gifts will result from a comprehensive program of engagement involving thoughtful, well-planned conversations with parents, alumni and their representatives that lead to concrete action. This entails a multi-year investment in a nuanced program of engagement that maps coherently and seamlessly into the institution’s own development campaign.

Here are some of the key components that need to be implemented to achieve success with international donors:

Diversity and inclusion Major gifts from international and diverse audiences will occur when our prospects see themselves as part of the “inner circle.” They want to feel that their opinions count, that they are included in major decisions about the future and direction of our institution, and that they and their children have an equal place in the school’s life. The impact of diversity and inclusion is far reaching, ultimately reflected not only by the make-up of the student and alumni body, but also by hiring practices. In the short-, medium- and long-term, this will impact board appointments, teaching appointments, advancement and admissions staffing decisions, and general staff hires. 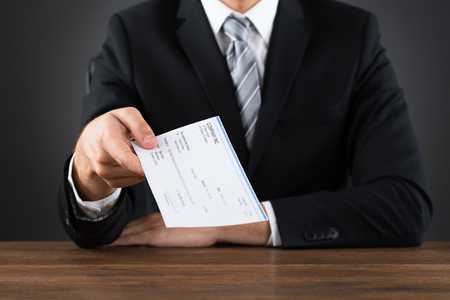 Cultural proficiency One of the keys to success in developing an international program at our institution is to understand and embrace diverse cultures. This requires:

It should be noted that while wealthy Asians are increasingly philanthropic, they expect to be joining a community of their peers. This speaks to the importance of current high net worth prospects, who are seen to be peers, to also be seen to be supporting the organization at levels commensurate with their capacity to give.

Market intelligence It is challenging to conduct major gift research in Asia, especially in mainland China. With few exceptions, people keep knowledge of their wealth under the radar. Not only is it inappropriate to talk about or brag about money but, given security issues, wealthy individuals avoid drawing attention to themselves and their families.

In addition to wealth screening by specialist vendors and prospect research on individuals identified, the best way to understand wealth capacity as an indicator of philanthropic potential is ongoing engagement by key organization staff and/or appropriate intermediaries.

Wealthy Chinese, in particular, use intermediaries to act as their trusted advisors in the conduct and negotiation of their business. This allows the individual to manage tricky conversations without their risking loss of face. Working with intermediaries will enable the institution and its most influential stakeholders to build trusted relationships without the distraction of money or negotiating tactics. Prospect research and information-gathering efforts of staff help to ensure that strategic conversations are informed and information is up-to-date. Often, the entire negotiation can be conducted by intermediaries, culminating with a public announcement by the institution’s spokesperson.

Fundraising from pluralistic communities in Canada As mentioned in the opening section, more one in five Canadian residents are born outside of Canada. In addition, the Aboriginal peoples of Canada are the fastest growing population segment in the country. Significant research has been conducted on the underlying dynamics both from the perspective of philanthropy as understood within the different cultural contexts, as well as evolution of people’s lives as they adjust to their respective environments.

Diana S. Newman, in her 2002 book Opening Doors: Pathways to Diverse Donors, examines the differences between the established model of fundraising from “mainstream” populations and models appropriate for diverse communities. She notes: “In the traditional donor pyramid of giving, the organization begins its development efforts with a broad base of prospective donors that includes board members and volunteers; clients, patients, students, and visitors who know about the organization; selected categories of people bases on factors such as interests, zip (postal) codes, jobs, and wealth; and the general public. Once the donor has made the first gift, that person is a candidate for annual support at increasingly higher levels. After several years of annual support, the donor is ripe to be asked for a larger commitment to a capital campaign or a special project. At the top of the pyramid are those rare donors who will complete gift plans naming the organization as a beneficiary of charitable provisions in wills, trusts, or other types of planned gifts.”

Many charities in Canada erroneously apply this model of engagement in their interactions with all communities. There are multiple reasons why the standard pyramid of giving does not apply in many cultures, “from the pyramid’s perceived inaccessibility to its hierarchical nature, from its formality to the implication that those on the top are standing on the backs of those below.”

Following the publication of Cultures of Caring in 1999, Jessica Chao introduced the concept of a continuum of philanthropy that has been further adapted by Diana Newman and that resonates with Canadians of many multicultural backgrounds, including those of South-East Asian, South Asian, African, Hispanic/Latino heritages. A visual representation of this continuum of philanthropy is as follows: 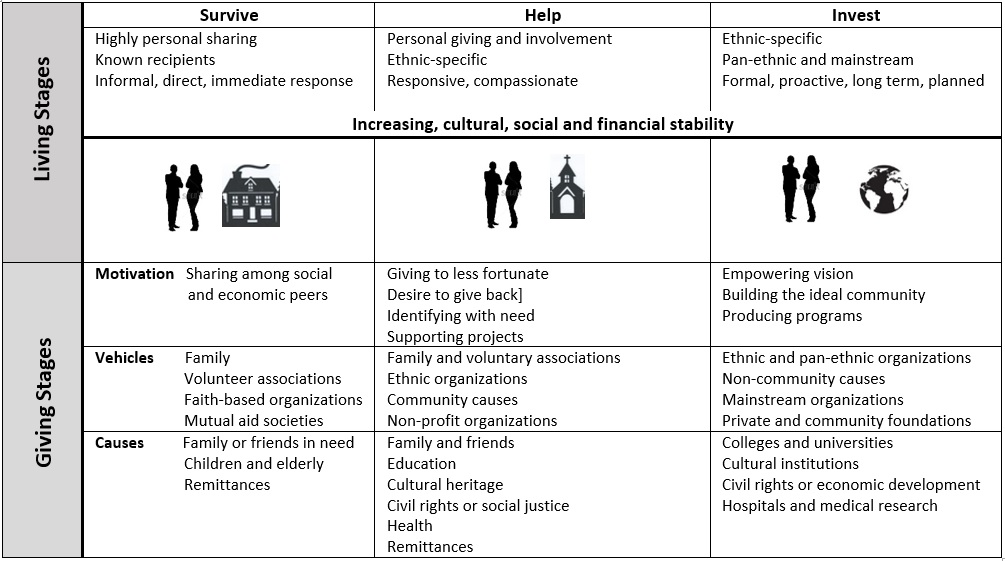 Newman notes: The continuum “starts with families concerned with survival and basic needs, who freely share resources with others in similar circumstances. In the middle are those who are able to help others who have less. On the right are people ready to invest in their communities and in other institutions to accomplish visionary goals. To progress along the continuum, the individual must attain increased levels of financial, cultural, and social stability. As families make permanent homes and become vested in the community, they move from left to right along this continuum.”

The Aboriginal peoples of Canada, as the fastest growing segment of Canadian population, are becoming significant constituencies in many large centres across Canada. These facts have profound implications for all charities in Canada, from recruitment and retention of staff to understanding the cultural, social and communal contexts for their philanthropic engagement.

The model for philanthropic engagement with the Aboriginal peoples of Canada is very different from that of immigrants and other cultural and religious communities. The framework for this engagement has been described by Diana Newman as “the cycles of giving.” She notes that Aboriginal communities “view philanthropy as a network of continuous overlapping cycles,” and adds that they “did not relate to the continuum of philanthropy because of its linear nature. Instead they described cyclical fundraising models in terms of the seasons, the circle of life, a cycle of renewal, overlapping rings with many intersections, or a network. They saw all of life’s facets inseparably interwoven in a universal web.” 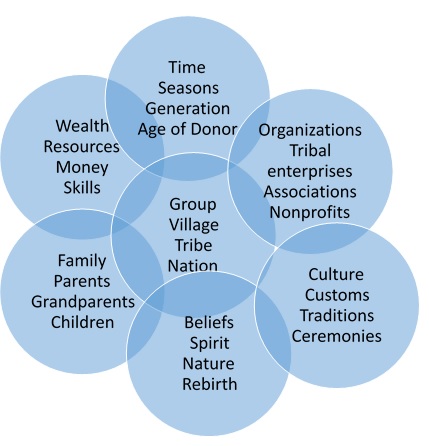 In these communities, first impressions matter. They want to know who is in the room and who they are. Mainstream leaders may become impatient to begin the formal agenda, but Aboriginals know that introductions are the most important part of the meeting. Participants can form networks and begin friendships based on how people introduce themselves.

Read the second part of this blog next week!